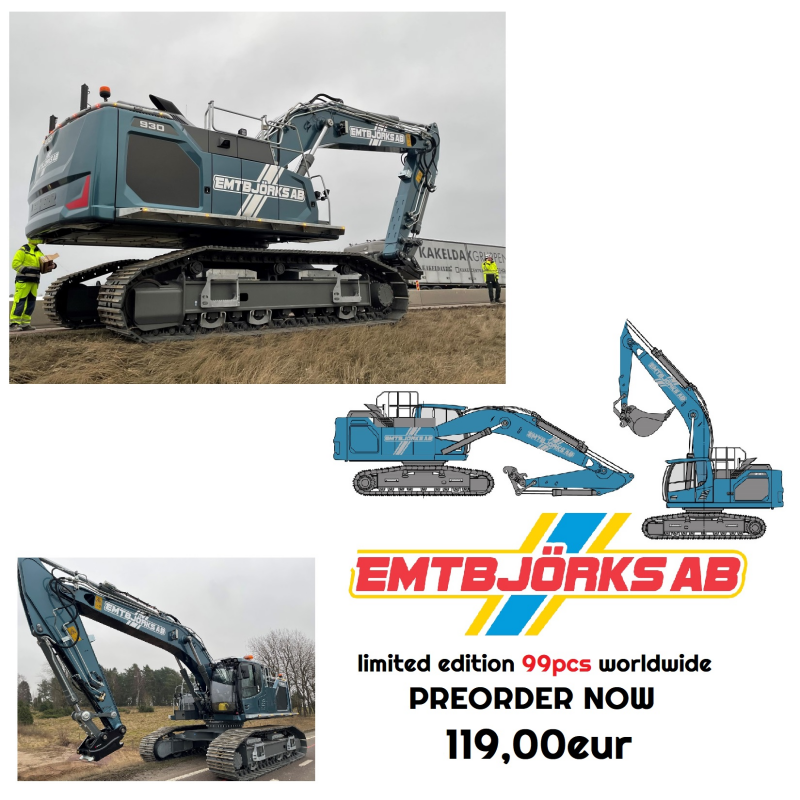 behind the scenes of a miniature project: Liebherr R930 Emtbjorks AB

Let me give you a behind-the-scenes look at this project, which stems from my own personal interest (... if it is called a hobby and passion, that's why).

We are in Sweden. After seeing a post from the Swedish Liebherr dealer Liebherr-Sverige AB about the delivery of this machine, I decided to contact the purchasing company Emtbjörk AB, where I immediately found a great helpfulness and courtesy, so much so that the deal was closed within a few hours.

The company was founded in 1952 in Emtbjörk, in the county of Värmland, and has grown over the years, expanding its business and consequently its fleet of machinery, which includes tracked and wheeled excavators, dump trucks, wheel loaders and crushing and screening systems for inert materials. Today, 40 employees work at the Hagfos site, and the company is run by the second generation of the family.

We decided to make something really special, and therefore a very limited series of 99 total pieces of this beautiful machine: very special is the metallic colour, as well as the light bar on the rear bonnet that characterizes it together with the GPS antennas, accessories developed directly in-house with 3D printing and that will accompany the preparation of the model. Exclusive design and distribution by GIFTMODELS.it, which sold out within hours of the announcement. Satisfaction for all the players involved in the project, but above all for collectors who will hold in their hands an object that will increase its value over time, due to the peculiarities of the idea, starting from the very characteristic real excavator.